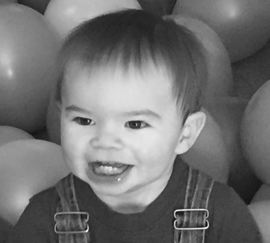 Neuroblastoma is a rare disease in which a solid tumor (a lump or mass caused by uncontrolled or abnormal cell growth) is formed by special nerve cells called neuroblasts. Normally, these immature cells grow and mature into functioning nerve cells. But in Neuroblastoma, they become cancer cells instead. The exact cause of this abnormal growth is unknown, but scientists believe it’s related to a defect in the genes of a neuroblast that allows it to divide uncontrollably.

What we thought was just a normal ear infection turned out to be a parent’s worst nightmare. That Sunday, he was diagnosed with an ear infection, which he saw a doctor for and was prescribed antibiotics for. The following day, we noticed the left side of his face was completely swollen, so he was taken back to the doctors, who immediately told us to take him to the emergency room for swollen lymph nodes. After many exams by multiple doctors they diagnosed him with cancer on Tuesday. His cancer started at his adrenal gland where he has a tumor. It also caused a tumor, the size of a baseball, inside his head and another smaller one on the back of his head. He had surgery on Thursday to have the huge baseball size tumor removed, which was a risky surgery because he could have bled out from the size of it.

The surgery was successful, but the journey has only just begun. The next steps in his journey are radiation therapy, chemotherapy, immunotherapy, and future surgery. At this time there is no telling how long the healing process will take.

We are raising money to help with the expenses of his treatments and family expense, because both me – his mother (Jessy), and his father (Michael) are out of work to attend to him. Wyatt also has a big brother, Mikey who is 11 years old, is trying to be strong for him. We will be going through a lot of lifestyle changes due to Wyatt’s sickness and could use all the help and support we can get.

We appreciate any donations that can be contributed to this cause. Please help Baby Wyatt beat this cancer and get him back to health!!   Fundraiser page for Wyatt –   http://www.gofundme.com/tfa7af7